Hi, been meaning to do this for a while but never seemed to find the time. Well, in this new Covid-19 world of ours I’ve got all the time in the world now! I’ve been a photographer in Edinburgh since 1990, starting off as a freelance photographer for the Evening News and The Scotsman. Then I was a staffer for a local newspaper for a few years before going back to being a freelance, still working for the newspapers but steadily taking on more corporate jobs until concentrating fully on that sector in 1998.

I’ve been involved in photography since I left school in 1977 and started working as a darkroom technician at Turners photography in Newcastle Upon Tyne. Photography has given me everything over the years and my enthusiasm for the medium is still as strong as ever. I thought it would be nice to give something back. I’ll be posting photos with a little bit of info about them over the next few weeks and hope this can stimulate some conversation since, at the moment, there’s little else we can do. 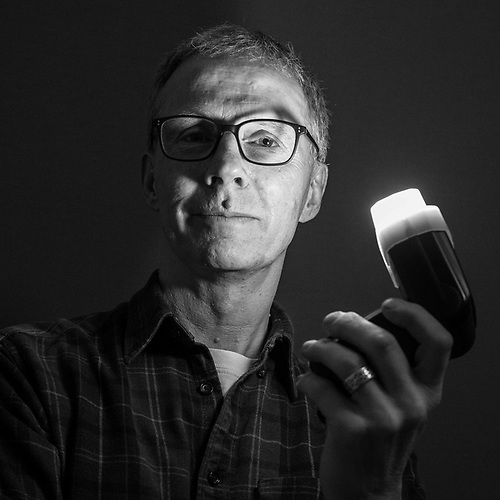 If you are a certain age you will know of this man. In the early 80’s Terry Waite acted as hostage negotiator in the Middle East securing the release of many western hostages. He was eventually taken hostage himself, tortured and spent 1763 days in captivity, the first four in solitary confinement, those eyes have seen a lot!

Because I worked Saturday photographing the football for the newspapers I was given Tuesday off in lieu. in 1993 a miners co-operative got together decided to reopen Monktonhall colliery  just outside Edinburgh. This seemed like a good second project to follow on from my ‘Life on the Tyne’ work so I approached them for permission to document their venture. They were very happy to let me take photographs and allowed me total excess to everywhere in the colliery including 3000 feet down onto the coal face.

Waiting for the shift to start

End of a shift

By the time I took this shot the miners had total trust in me and I became part of the background which allowed me to hang about for quite a while as these two guys chatted. This moment happened in the blink of an eye but I was ready for it and got the shot, just as well, it was the last frame on the roll of film!

After college I managed to get a job working for the MoD at 8 Signal Regiment in Catterick North Yorkshire as a civilian photographer/video operator. I had a good friend at college from Edinburgh who I had visited just before I moved to Yorkshire so even as I started off on this new job I’d already made my mind to move to Edinburgh, it was a city I had instantly fell in love with.

Two years later in Autumn 1990 I handed in my notice and armed with a couple of cameras, lenses and a flashgun moved to Edinburgh. I managed to get a part time job working in the local newspaper’s darkroom while doing some photo assignments here and there. My first front page cover was when I covered the Edinburgh Beltane festival which was held at Carlton Hill and ended up at sunrise on top of Arthurs seat.

I eventually got a job as a full time photographer which I did for 3 years before I decided to go freelance. I really enjoyed some aspects of being a press photographer especially the sport but there were other sides to the business which I felt uncomfortable with, being freelance allowed me to be a bit more choosy over what I did and I was also able to pursue more commercial clients.

Football is the main sport that’s covered by the newspapers, followed by rugby

Working for newspapers was a steep learning curve and it taught me a great deal, even if there were some aspects of it which I personally didn’t agree with.

After nine years of working in a darkroom I decided I needed to change things and take my photography more seriously. I handed in my notice and did a two year course in photography at the newly opened College of arts and technology in Newcastle.

It was a great two years where I really started to expand my knowledge of photography. It was in the library where I started to come across books by Cartier Bresson, W Eugene Smith, Diane Arbus and Irving Penn. I’ve always felt one can learn more from looking at great photographers work the you can ever from a ‘How to take photographs’ kind of book.

I started a personal project during my first year at college, photographing the people who live and work on the river Tyne. By the time I finished my National Diploma I had an exhibition of these photographs at Newcastle library followed by a book.

I worked in Darkrooms for the next nine years, the idea of becoming a photographer disappeared when I got my first motorcycle in 1978 then after that all my time seemed to be dedicated to supporting this ‘two wheeled’ addiction and having fun.

In 1985 I started to realise I needed to get myself sorted out and focus back on my photography. I used to go down the Newcastle quayside where there was, and still is, a great place called the Side Gallery They are well known for their promotion of documentary photography exhibition. I first saw the work of Finnish Photographer Sirkka-Liisa Konttinen documenting the Byker before it all got swept away. I also remember seeing the powerful works of Don McCullin, the stark Black and White images once seen never forgotten.

In 1986 I decided to give up my job in the darkroom and to take a two year photography course at Newcastle College of Arts and Design. This photograph was taken at my local corner shop in Gateshead and is still a favourite of mine. We were in the store room chatting and the owner raised her arm to point something out, I clicked and got the shot. You can see the ‘McCullin’ influence with the way I printed it. Ilford graded paper went from OO (soft) to 5 (hard) contrast, I was always bouncing about 4-5.

I started working as a darkroom assistant in 1977 just after my sixteenth birthday. I started working at Turners Photography in Pink Lane, Newcastle upon Tyne which was one of the largest Photography Companies in the North East. The building housed the retail side on the ground floor, with the floors above containing the film department, Administration, picture mounting and art department, photographers studio and right at the top the processing labs.

We had B&W developing tanks for 35mm, 120 and 5×4 sheet film, the same for C41 colour process and also E6. There was also the B&W and colour printing labs and an area for copying graphics. All very daunting for someone straight out of school, I spent the first few months just washing, drying and trimming the borders of prints, oh and being the general dogsbody, popping down the the local Greggs for various pies, pastries etc. Starting at the bottom there was only one way to go, but it took me quite a while.